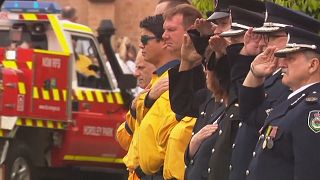 'A decent guy': Funeral of firefighter killed in Australian fires

A funeral service was held on Tuesday in Sydney for a volunteer firefighter who died battling blazes in Australia.

Andrew O'Dwyer, 36, was in a truck convoy fighting blazes southwest of Sydney on December 19 when a tree fell and caused the vehicle to roll off the road.

O'Dwyer and another volunteer firefighter, Geoff Keaton, both fathers, died at the scene.

The commissioner of the New South Wales Rural Fire Service, Shane Fitzsimmons, pinned a medal on O'Dwyer's young daughter and presented her with her father's helmet.

"A genuine, decent guy, he loved family, loved brigade, loved outdoors, and loved serving his community," he said during the service.

Rural Fire Service volunteers and representatives from other emergency service agencies paid their respects as O'Dwyer's casket was carried in a hearse.

The fires, fueled by drought and the country's hottest and driest year on record, have been raging since September, months earlier than what is typical for Australia's annual wildfire season.

So far, the blazes have killed 25 people, destroyed 2,000 homes and scorched an area twice the size of the American state of Maryland.