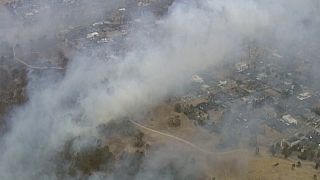 Firefighters were battling a bushfire in suburban Melbourne on Monday amid emergency warnings across the Australian state of Victoria.

Residents of Bundoora, Greensborough and Mill Park, in the city's northeast, have been ordered to take shelter immediately, local media reported.

It is one of 11 emergency warnings for fires across Victoria, mostly in the East Gippsland region, amid scorching temperatures and strong winds.

Out-of-control wildfires were forcing thousands of residents and holidaymakers to evacuate.

Cooler temperatures were expected to sweep into the state late Monday, but windy conditions and thunderstorms heightened the risk of wildfires spreading.