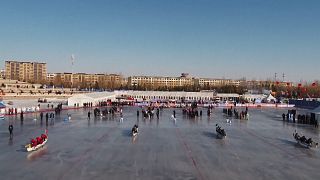 The race took place in Inner Mongolia - an autonomous region in northern China.

Competitors raced on a frozen lake to get to the finishing line. Boats were equipped with blades underneath.

"This is my first time to Duolun for the ice dragon boat race," said Tai Hongyu, a member of the Erenhot City team, told the Associated Press.

"Both the natural environment and local customs are particularly attractive. I will come here again with my family folks and friends."

Audience members cheered as the 45 teams used a special stick to get the boats to move across the frozen lake.