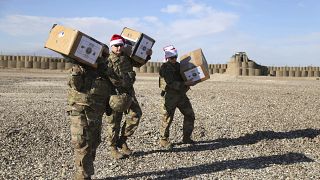 Special Christmas delivery for US troops in Syria

US military personnel began an operation to deliver Christmas presents to troops in Syria.

Stockings stuffed with gifts were flown to five bases in the country's east.

A military band also travelled by helicopter, playing Christmas carols as the troops received their presents.

The gifts were mainly donated by army support organisations in the US as well as churches and other charity groups.

Some of the bases involved in the 'Holiday Express' mission were built following Turkey's offensive against Kurdish forces in northeastern Syria in October.

The offensive happened after US President Donald Trump withdrew the troops from the northeast and redeployed them to other bases.