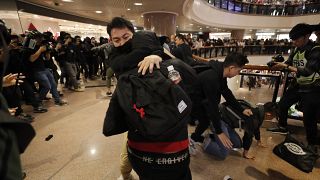 The demonstrators stormed into Harbour City mall in Tsim Sha Tsui and clashed with riot police and plain-clothed officers.

Some of the officers were seen hitting people with batons as others pushed bystanders back.

Riot police threatened some of the protesters with pepper spray during the melee which happened during busy Christmas Eve trading.

The demonstrations erupted in June over proposed extradition legislation and then mushroomed into a sustained anti-government movement pushing for full democracy and other demands have burned through police manpower.