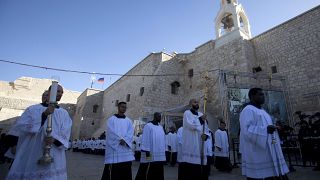 Palestinians in Bethlehem are getting ready to host pilgrims looking to celebrate Christmas there.

The Church of the Nativity in the West Bank city is venerated as the traditional site of Jesus's birth.

The Christmas festivities traditionally bring a boost of holiday cheer to Christians in the Holy Land, whose numbers have shrunk over the decades and now make up just a small percentage of the population.

The acting Latin Patriarch of Jerusalem, Pierbattista Pizzaballa, arrived at Bethlehem's Manger Square for a service to mark Christmas eve.

In Baghdad, protesters have built a Christmas tree out of Iraqi flags and installed it in the middle of Tahrir Square in a show of solidarity with the Christian people of Iraq.

Saad said that it was built to "show solidarity with our Christian brothers, and also to celebrate the birth of Jesus."

He added that the protesters wanted to celebrate the holiday, but felt that it was tinged with sadness due to the loss of hundreds of young people in ongoing protests in Baghdad.

At least 425 people have died since the leaderless uprising shook Iraq on October 1.

The male elephants, aged 25, 15, six and five, and their mahouts put on a performance on the school ground before handing out toys and snacks to the students.

As part of elephant troupe at one of the most famous elephant camps, the four elephants entertained the children with some dance moves and obedience shows.