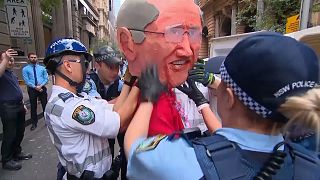 Environmental activists temporarily blocked a street in central Sydney on Friday and demanded the Australian government declares a climate emergency.

Demonstrators from the Extinction Rebellion movement glued themselves to the road in Christmas-themed costumes.

New South Wales declared a seven-day state of emergency on Thursday as around 2,000 firefighters battle 100 wildfires across the state.

Wednesday was the hottest day on record in Australia, averaging 41.9 C (107.4 F), beating the landmark set a day earlier, according to The Bureau of Meteorology.

Adelaide, in the southeast, is in the midst of a heatwave peaking at a sizzling 46 C (115 F) on Friday, while Melbourne was forecast at 44 C (111 F), which would be the Victoria state capital's hottest since the devastating Black Saturday wildfires in 2009.

The unprecedented conditions have reignited the debate on whether Australia's conservative government has taken enough action on climate change.

Australia is the world's largest exporter of coal and liquefied natural gas.