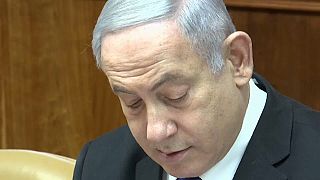 Israel faces prospect of third general election in a year

A midnight deadline came and went on Wednesday without Israeli politicians being able to form a new government.

It means the country is facing an unprecedented third general election within a year.

The Knesset, the Israeli parliament, rushed through a bill to dissolve itself with March 2nd 2020 as the provisional date for the next poll.

It follows the breakdown in talks between embattled caretaker premier Benjamin Netanyahu and the Blue and White Alliance leader Benny Gantz.

Both men have repeatedly failed to build a governing majority following the last - indecisive - election in September.

Each has blamed the other for the impasse, in which neither could agree on the terms for a rotating premiership and the sharing of power.

Netanyahu is also facing a fight for political survival after a criminal indictment involving bribery and three separate corruption cases. He has denied any wrongdoing.

New elections are deeply unpopular with a weary Israeli public, which has expressed mounting anger and frustration with the entire political class.

A further trip to the polls also carries a heavy economic price; it will be well into 2020 before a new budget is passed, which will mean months of cutbacks.