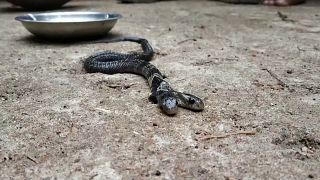 The snake strayed into Ekarukhi village and caused a stir as it became the centre of attention.

Villagers fed it milk and refused to hand it over to forest officials as they said they associated it with mythology.

Experts believe the two heads can be a result of the incomplete splitting of embryos or unfavourable environmental factors.

Naja Kaouthia, the scientific name of the cobra, is found in south and southeast Asia. The venomous reptile is usually found in paddy fields, swamps, grasslands, and forests among other places.