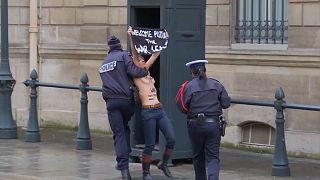 Police apprehended topless Femen protesters on Monday (December 9) as they chanted slogans against Russia's leader outside the Elysee presidential palace in Paris, ahead of a Ukraine crisis summit.

"Stop Putin’s War!" the protesters shouted as they were arrested by police around a crowd of journalists waiting to enter the summit venue.

"This meeting, which aims to find a possible agreement to emerge from Russia’s war with Ukraine, should not make other international leaders forget Putin’s political intentions, which has made war, confrontation and repression its trademark" FEMEN claimed on their website.