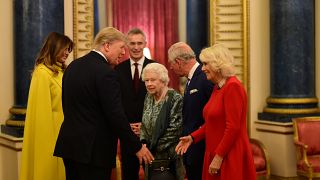 NATO leaders attended a reception hosted by Queen Elizabeth II at Buckingham Palace on Tuesday, December 3, during a special NATO summit held to celebrate the 70th anniversary of the alliance.

The Queen was joined by Prince Charles, his wife Camilla, NATO Secretary-General Jens Stoltenberg and various other government heads.

But while the high-profile meeting was happening inside the palace, protesters began gathering on the outisde against the attendance of US President Donald Trump and Turkish President Recep Tayyip Erdogan.

Kurdish campaigners chanted slogans calling on Turkey to pull its troops out of Rojava, the Kurdish autonomous zone in northern Syria.

The banners labeled Erdogan as a war criminal, while chants from protesters included: "Donald Trump is not welcome here!"