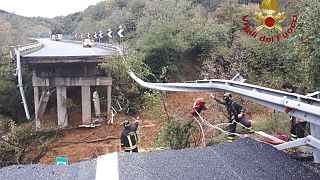 Part of a viaduct near the city of Savona, Italy collapsed on Sunday after the region suffered continuous heavy rains.

The collapse affected about 30 metres of the highway along the Turin-Savona road and happened approximately one and a half kilometres from Savona.

Firefighters worked at the scene, and according to local media, there were no injuries.

Much of Italy is under alert for flooding from heavy rains, a problem exacerbated by a lack of maintenance of the country's many rivers beds.

The level of the Po River is increasingly high and little rivers in the Piedmont region broke their banks prompting authorities to issue major flood warning.

Officials were monitoring the swelling of the Po River, Italy’s longest, which passes through Turin, one of northern Italy’s most populated cities.

In Turin, the planned Marathon has been cancelled, due to bad weather. Rail and road traffic have been severely disrupted across the Piedmont region and the province of Alessandria is among the worst hit areas.

The Tanaro River in Alessandria exceeded the danger mark and the tollbooth of the highway Alessandria east-Alessandria west has been closed due to floods. One woman is still missing.