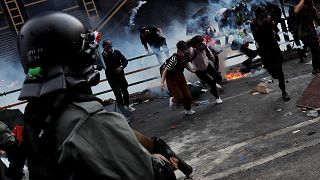 Firing tear gas and wielding batons, Hong Kong police swooped in as protesters tried to escape from a university campus on Monday.

Cornered in the campus, the protesters emerged in force but were met by tear gas from police who had blocked all exits.

Riot police moved in and accosted many protesters, and it was not clear how many were able to escape.

Hong Kong has been rocked by anti-government protests that have raged for more than five months.