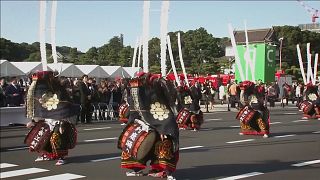 A national festival to celebrate the enthronement of New Japanese Emperor Naruhito was held at the Imperial Palace Square in Tokyo on Saturday.

Events began in the afternoon with a parade of traditional Japanese folk dance groups from around the country and music bands of the Metropolitan Police Department and the Tokyo Fire Department performing.

The second half of the festival takes places in the evening, featuring music performances.

Both Emperor Naruhito and Empress Masako are expected to make an appearance and Prime Minister Shinzo Abe is also scheduled to make a speech.

Russia blames 'sabotage' for blasts at Crimean military base