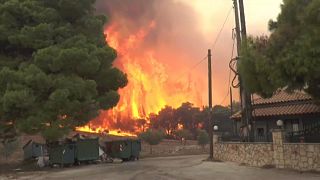 Forest fires struck in more European countries than ever before according to a new report by the European Commission published on Friday.

Last year, wildfires destroyed nearly 178,000 hectares of land across the continent. The EU Commission says it is having to spend more to protect our countryside. In 2018, the EU Civil Protection Mechanism was activated five times to respond to forest fires in Europe. In total, 15 planes, 6 helicopters, and over 400 firefighters were mobilised in the summer,

The report says Portugal was, yet again, the country with the highest scorched area, even though its total was a small fraction of the area lost to fire in 2017 and one of the lowest totals of the last 10 years. Forest fire experts from across the EU went to Portugal on a prevention and preparedness mission to help boost the country's capacity to deal with forest fires.

Sweden experienced its worst fire season in history. The total burnt area was the second-highest in the EU, an unusual position in the ranking for a northern country. And despite a smaller overall area burnt than in previous years, temperatures above average persisted in central and northern Europe for most of the summer in 2018. This created conditions that helped the ignition and spread of forest fires, causing high economic and environmental losses.

The European Union spent €1.6 million in transportation costs to mobilise support to the affected countries. Furthermore, over 139 Copernicus satellite maps on forest fires were produced on the request of member states.

In March 2019, the EU upgraded its Civil Protection Mechanism to improve the protection of citizens from disasters and the management of emerging risks. It also created a transition fleet of firefighting aircraft in the summer of 2019. It has been deployed twice already to fight forest fires in Greece and Lebanon. Also, the European Commission called for stepping up EU action on deforestation and forest degradation and committed itself to further action, including the development of the European Forest Fire Information System into a tool for wildfire monitoring on a global scale.

The Annual Report on Forest Fires also notes that in 2019 the fire season started early, because of dry and windy conditions, with high temperatures.