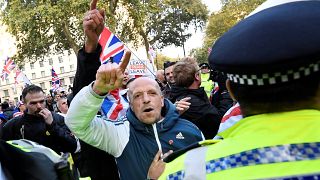 British police have arrested one man after scuffles broke out outside Downing Street in Whitehall, central London.

Anti-EU activists, who call themselves Brexiteers, had been marching by the gates of Downing Street, which houses the residence of the Prime Minister when some pushed through police lines.

Police moved in to break up the crowd, then detained one man and led him away.

Other people hurled insults at police, while the majority of the crowd marched peacefully past towards Westminster Palace.

On the day that the UK was due to have left the European Union, Brexiteers demonstrated outside parliament on Thursday in protest at the delay in Britain's departure.

British prime minister Boris Johnson tried repeatedly to persuade parliament to back his departure deal but lawmakers refused to do so, prompting Johnson to call an election on December 12.

The new deadline for Britain's departure is January 31.