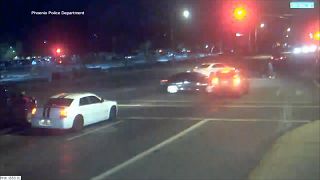 Video released by police in Phoenix, Arizona shows a collision in which a car ran through a red light and narrowly missed a couple pushing a child in a buggy.

The pedestrians were crossing a main road on October 14 when the car appeared at high speed and crashed into another vehicle, missing the couple and the buggy by just a few feet.

According to police reports, a Jeep Renegade, driven by a 23-year-old, failed to stop for a red light and collided with a 2016 Chevrolet Cruz, driven by a 27-year-old woman.

Police say the driver of the speeding car — and a woman with him — ran off after the incident. The driver was later arrested and charged with aggravated assault.

Police said the driver was booked into the Maricopa County Jail and charged with numerous crimes.

The driver of the other vehicle was hurt, but her injuries were described as not life-threatening.