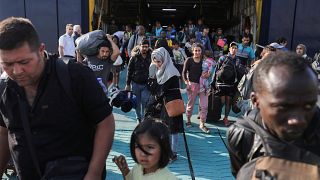 Migrants housed in overcrowded camps on the Greek islands of Samos and Lesbos are being moved to the mainland.

The islands are close to Turkey and have seen a surge of new arrivals. The UN refugee agency, UNHCR, says there are now 33,700 people living there.

In late September, a woman died in a fire in a tent in a camp on Lesbos, while a fire in an overcrowded camp in Samos forced hundreds of people into the streets this month.

Many of those being transferred are families with children. But the government says they will be taking a hard line on those who do not qualify for asylum.

Euronews' Yannis Giaginis is in Greece and has been meeting some of the migrants - watch his report in the player above.