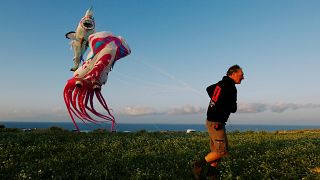 Hundreds of colourful kites perk up skies above Malta's Gozo

Dozens of giant colourful kites flew against a blue sky above the Maltese island of Gozo on Sunday (October 20), as the International Kite and Wind Festival came to a close.

Between 18 and 20 October, Gozo held a kite festival, which gave visitors the chance to experience the joys of this ancient tradition, in the second edition of the Gozo International Kite and Wind Festival.

The three-day festival included a competition for international teams of professional kite masters.

This year, for the second edition of the festival, the village of Gharb decorated its streets with an overhead display of nearly 2,000 colourful kites. There were also organising workshops and competitions for the best handmade kites, an craft which has deep roots in Gozo.

Visit Malta explains on their website that in the past, they were used variously as a means to send messages by troops during wars, to measure distances, as royal sports or simply to give joy to children who had only paper and bamboo sticks to make their own toys..