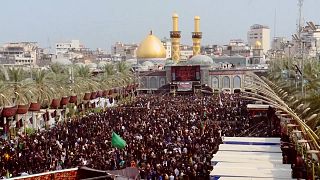 The event, regarded as the largest annual public gathering in the world, is a 40-day mourning period commemorating the seventh-century death of the Prophet Muhammad's grandson, the Shiite saint Imam Hussein.

Pilgrims performed a ceremonial chest-beating gesture as they gathered at the shrine.

This year's Arbaeen ceremonies take place amid widespread anger in Iraq's Shiite south over the government's heavy crackdown on protests that erupted earlier this month against unemployment, corruption and government mismanagement.

The event mobilises hundreds of thousands of pilgrims every year from around the world.

The pilgrimage, known in Arabic as the Ziara, marks the anniversary of the 40th day of mourning following the 7th-century death of the Prophet Muhammad's grandson Hussein at the hands of the Muslim Umayyad forces in the Battle of Karbala, during the tumultuous first century of Islam's history.

In Lima, thousands of worshippers dressed in purple robes paraded a revered icon through Peru's capital on Friday (October 18) in a tradition dating from 1687 when a mural depicting the same image of Jesus Christ escaped unscathed in a powerful earthquake.

The procession of the Senor de Los Milagros (Lord of Miracles), a mural picturing a dark-skinned Jesus that is said to have been painted in a shrine by an Angolan slave, has drawn crowds of Roman Catholic devotees for centuries.

The icon is a copy of the mural, which is revered for its powers to cure the sick and protect against tremors in the Andean country.

Originally worshipped by Afro-Peruvians, the Senor de Los Milagros has become Peru's best-known icon and has inspired worshipers around the world.

President Pedro Martin Vizcarra saluted the icon, leaving the government palace to do so.