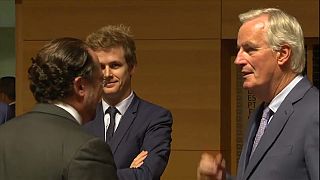 Speculation over Brexit deal based on major shift by UK government

Speculation over Brexit deal based on major shift by UK government

There's speculation that the European Union and the UK government may be close to securing a deal over Brexit. Marathon talks went on into the early hours of Wednesday morning. The discussions have ce