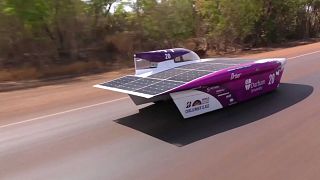 The 3,000km Bridgestone World Solar Challenge in Australia is one of the most prestigious solar car races.

The biannual event first began in 1987 and is based on a notion that a 1000-watt car would complete the trip from Darwin to Adelaide in 50 hours.

The teams, comprising of secondary and tertiary students from countries including Australia, Sweden, the Netherlands, Japan and the United States, must be self-sufficient, travelling as far as they can each day until 5 pm.

They must make camps to stay overnight along the route through the desert.

The solar vehicles are categorised to compete in three different classes: challenger, cruiser and adventure.

Solar Team Twente were in the lead towards the end of the first day of racing, heading off Top Dutch, Belgians Agoria Solar and defending champions Vattenfall.

The race is expected to take a week for most cars, which will travel at speeds of 90-100km/h powered only by the sun.