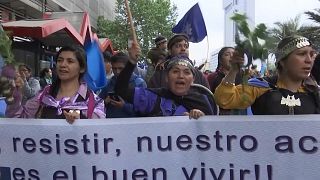 Dressed in colourful suits typically worn by the Mapuche and waving the Wallmapu flag, groups of men, women and children walked down principal avenues with large banners bearing phrases such as: "Stop violence toward kids in (Mapuche) communities."

Viviana Vargas said she had come to the march to support the Mapuche in their struggle for water as a severe drought in parts of the country contributes to disagreements over distribution and allocation.

The demonstration, which mostly took place without incident, grew heated in certain areas after protesters threw flares toward police, who responded with tear gas and water cannons.

Leaders of both the Mapuches and the Chilean government have disputes dating to the late 19th century, when the Mapuches, known for their ferocity resisting Spanish and other European settlers, were definitively defeated by the Chilean military.

Thorny issues have historically included ownership of ancestral lands in the southern Araucania region, legal recognition of the Mapuches' language and culture, and discrimination that their leaders say permeates all facets of life.