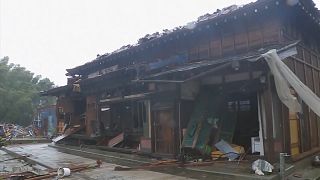 Tornado hits in Japan as country braces itself for typhoon

A tornado ripped through Chiba Prefecture — south-east of the capital Tokyo — on Saturday, as Japan continued to brace itself for the arrival of a powerful typhoon that is forecast to be the worst in six decades.

At least one man was killed as the tornado overturned a car in Ichihara, city officials said, while five people were hurt as the twister ripped through a house.

Typhoon Hagibis, closing in from the Pacific, brought heavy rainfall in wide areas of Japan ahead of its landfall, including Shizuoka and Mie prefectures, southwest of Tokyo.