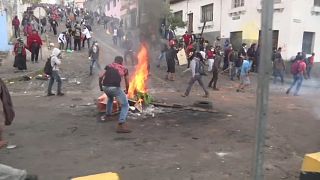 Protesters hurled rocks at riot police who responded by firing tear gas in the Ecuadoran capital of Quito on Friday (October 11).

It comes amid rising public anger over the austerity measures of President Lenin Moreno.

Police sought to dislodge protesters who had set up blockades on the capital's streets.

At least four protesters have died in the unrest in Ecuador and hundreds have been wounded and arrested.

The unrest has led President Moreno's government to flee the capital for a safer city on the coast and curbed nearly 900,000 barrels of crude oil production in the OPEC-member nation.

Moreno has repeatedly refused to reinstate a four-decade-old fuel subsidy, the chief demand of protesters who say its removal disproportionately punishes the poor.

He announced the measure as parts of his efforts to reduce the country's fiscal deficit, in keeping with a loan deal with the International Monetary Fund (IMF).

But opponents say it has pushed up prices of many consumer goods and will increase inequality in the South American country of 17 million people.