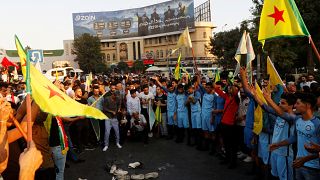 Kurdish forces in Syria have been thrown to the wolves by its American allies, a British man who fought alongside the Kurds has told Euronews.

Macer Gifford, a former currency trader who fought as part of the YPG against so-called Islamic State (IS) for four years, said Turkey’s military offensive against Kurdish forces in northeast Syria has undone everything the world fought for in the country.

Turkey launched an assault on Wednesday, aiming to drive the YPG — which it views as a terror group due to its links to the outlawed PKK in Turkey — away from its border.

Kurdish forces led by the YPG were instrumental in the defeat of ISIS, with around 11,000 losing their lives.

It is feared the instability in the region caused by the Turkish invasion could lead to the re-emergence of ISIS, with a host of world leaders condemning Turkey’s actions.

Euronews explains: Why Turkey is fighting Kurds in Syria, and how the US is involved

French President Emmanuel Macron warned Turkey it would be responsible in the eyes of the international community if IS capitalised on the situation.

An analyst at the SETA Foundation, a policy think tank in Turkey, told Euronews it was inevitable that Turkey would launch this attack on the Kurds, who he called “terrorists at the border”.

Omer Ozkizilcik, claimed IS was already returning in northeast Syria due to the hatred of local people towards Kurdish authorities there.

“The key to prevent ISIS coming back is to establish local government in the area and end the occupation of the YPG there, and this is what Turkey will establish,” he said.

But Gifford, who served with the YPG for three years, had a stark warning about the Turkish offensive.

“This invasion has thrown to the wind everything Britain, America, the rest of the world, including local forces have fought for, for the past four years,” he said.

“America’s enemies are going to carve up everything that we fought for.”