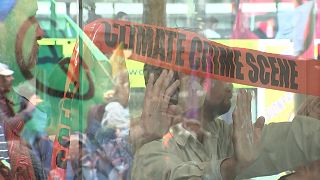 About 30 climate protesters were arrested, Extinction Rebellion said after the climate action group pledged to engage in civil disobedience in Wellington, New Zealand.

About 500 protesters blocked Stout Street in the central Wellington.

Protestors occupied a branch of the ANZ bank in Wellington demanding that they divest in fossil fuels. They left post-it notes around the branch and some protestors glued themselves to a glass wall inside the bank.

"I am never going to be opposed to someone being able to express their opinion and express their voices," New Zealand Prime Minister Jacinda Ardern said.

"But, in blocking people from being able to go and do their day to day job, doesn't necessarily take us any closer to the climate action that they are calling for."