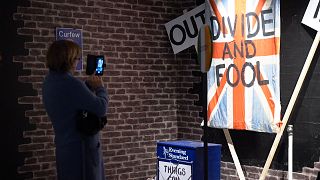 The installation called 'George, the Union is Cross' marks the 10th anniversary of Moniker International Art Fair in London.

The Union Jack flag hangs on the wall of this art space in London — but the language and imagery around it is disturbing.

'Divide and Fool' has been graffitied across it and it's surrounded by a homeless man in a sleeping bag and Molotov cocktails on Brexit newspaper headlines.

This dark look at the future of Britain is part of an installation at the 10th anniversary of Moniker International Art Fair in London.

Famed Berlin art institution Urban Nation was invited to curate the exhibition and called it 'George, the Union is Cross'.

Urban Nation's director Yahsa Young brought together 10 of the UK's best street and urban artists for the project.

The UK is due to leave the EU on October 31, but a deal is still yet to be agreed.