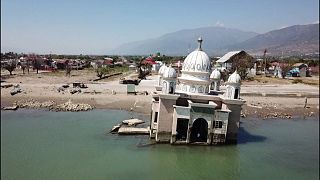 Aerial footage filmed this month and released by the UN Office for the Coordination of Humanitarian Affairs (OCHA) reveals the severe damage that still remains nearly one year after the devastating earthquake, tsunami and liquefaction disasters that hit Sulawesi, Indonesia.

In September 2018 a 7.5 magnitude earthquake struck the island and the combined effects of the quake and resulting tsunami led to the deaths of an estimated 4,340 people.

The International Federation of Red Cross and Red Crescent Societies confirmed that by September 2019 an estimated number of 57,000 people are still living in temporary accommodation without further news about the reconstruction of their homes.

"In the past year, Indonesian Red Cross staff and volunteers have brought emergency items like food, hygiene kits, mosquito nets and blankets to 108,000 people, and drinking water to 280,000 people.