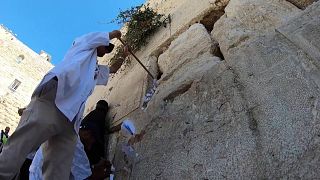 Equipped with long sticks, a team of cleaners on Tuesday (September 24) led by the Rabbi of the Western Wall gouged out written notes that visitors to Judaism's Western Wall in Jerusalem traditionally cram into its crevices.

Twice a year, Rabbi Shmuel Rabinovitch of the Western Wall oversees the collection of thousands of notes to ensure there's always room for more. The papers are then buried on Jerusalem's Mount of Olives in accordance with ritual.

Workers dug out thousands of crumbled notes ahead of the upcoming Jewish New Year.

The Western Wall is a remnant of the compound of the Second Temple that was destroyed in 70 AD. It stands today beneath a religious plaza known to Muslims as the Noble Sanctuary and to Jews as the Temple Mount.