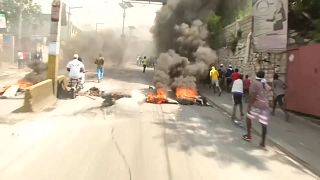 Clashes in Haiti continued on Monday hours after a senator fired a pistol during a confrontation with opposition protesters.

Demonstrators could be seen running down the streets of the capital of Port-au-Prince as tyres burned and police fired into the distance.

Earlier in the day, an Associated Press photographer was hit in the jaw by what appeared to be a fragment of one of the bullets fired by Sen. Ralph Fethiere outside Haiti's senate.

Chery Dieu Nalio was treated and released from a Port-au-Prince hospital and was expected to undergo further treatment this week to remove the foreign object from his jaw.

Another person outside the Senate also suffered an apparent wound to the stomach.

Several-hundred opposition members confronted ruling-party senators and Fethiere pulled a pistol when protesters rushed at him and members of his entourage.

For months, Haitians have been demanding the resignation of current President Jovenel Moïse whom they blame for a failure to address pervasive corruption and mismanaging the economy.

The country is running low on fuel and inflation is spiralling, leading to widespread public discontent.