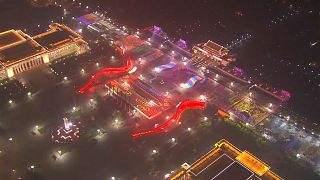 The third joint rehearsal for the upcoming National Day celebrations concluded early Monday morning in Beijing, eight days ahead of the 70th anniversary of the founding of the People's Republic of China (PRC), which falls on October 1.

The rehearsal was held in Tian'anmen Square and areas along the Chang'an Avenue in downtown Beijing, with the involvement of all procedures, links and elements, according to the media centre for the celebration of the 70th founding anniversary of the PRC.

A total of six parts of the celebrations were rehearsed, including a ceremony marking the celebrations, a grand military parade, a mass pageant and performances as well as emergency response. About 300,000 people were involved in the rehearsal and related supporting services.