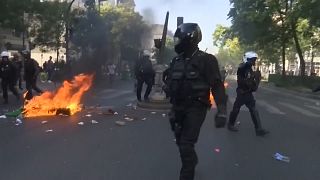 French riot police fought running battles with protesters on Saturday in Paris, after a climate march was disrupted by masked demonstrators and representatives of the "gilet jaunes" movement.

Police had made 163 arrests in Paris by the end of the demonstration and had pushed back around one hundred protesters who gathered on the Champs-Elysees shopping avenue, the Paris police prefecture said.

The government deployed a massive police presence as it feared "gilet jaunes" supporters and other activists, including "black bloc" anarchists, would take advantage of authorized protests over climate change and pension reform.

Some 7,500 police were mobilized, several districts including the Champs-Elysees were made out-of-bounds for protests, and over 30 metro stations closed.

The climate rally saw sporadic confrontations between police and masked demonstrators who had infiltrated the march.

Groups wearing black clothing associated with the so-called black bloc anarchist movement formed barricades, set fire to bins and a motorbike, and threw paint over the front of a bank.

The violence tarnished an otherwise peaceful march that brought thousands of people, including some yellow vests, onto the streets, a day after marches in Paris and other cities worldwide to demand government action against climate change.