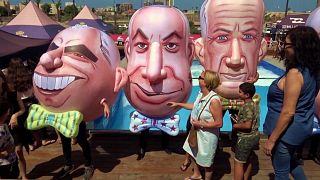 Israelis flock to beaches and malls on election day

Israelis flocked to malls and sandy beaches on Tuesday (September 17) enjoying the hot weather on election day, officially a sabbatical day in Israel.

The two main parties' campaigns in Israel's second parliamentary election in five months point to only narrow differences on many important issues: the regional struggle against Iran, ties with the Palestinians and the United States, and the stable economy.

An end to the Netanyahu era would be unlikely to lead to a big change in policy on hotly disputed issues in the peace process with the Palestinians that collapsed five years ago.

The election was called after Netanyahu failed to form a coalition following an April election in which Likud and Blue and White were tied, each taking 35 of the 120 seats in the Knesset or parliament.

Netanyahu, 69, has cast himself as indispensable and blighted by voter complacency over his tenure - the longest of any Israeli prime minister. He was prime minister from June 1996 until July 1999 and has held the post since March 2009.