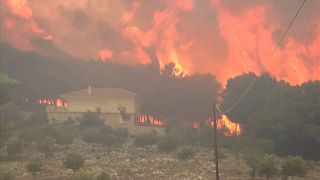 A forest fire on the Greek island of Zakynthos was still in progress on Monday but the overall situation was much improved in comparison with the day before, the fire brigade said.

The fire spread quickly due to the strong winds blowing in the area.

The flames reached the villages of Keri and Agalas, which were evacuated on Sunday afternoon.

One house was burned and there were reports of damage to farmhouses and a hotel.

The fire brigade said that pockets of fire were still burning in the villages Lithakia, Agalas and Keri but there was no active front. Firefighters were battling with the flames to fully contain the fire by the afternoon.

A total of 52 fire engines and crews, 171 firefighters in total, as well as nine groups of firemen on foot, two firefighting helicopters and four water-dropping helicopters assisted by 13 water-tanker trucks and digging machinery offered by regional and municipal authorities are battling the blaze.