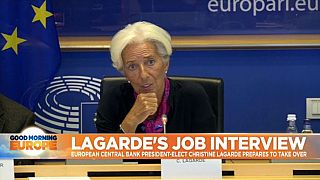 Christine Lagarde has been interviewed by European politicians over her nomination to lead the European Central Bank.

Lagarde is set to become the first woman to head the ECB and several MEPs have welcomed her nomination in the male-dominated world of finance.

She is set to take the reins at a period that the Eurozone economy faces serious challenges such as Brexit and trade tensions, a slowdown in China and the prospect of Germany, the EU's largest economy, going into recession.

Speaking at the European Parliament, Lagarde said more needed to be done to weather the coming economic headwinds.

"Some countries in the euro area can actually use some of their fiscal space in order to improve broadband, infrastructure and set in place the public spending that will actually help fight the recession,” she said.

“I think that there are more countries in that situation nowadays. So, certainly there is not lot of room but there is some room that can be used in terms of fiscal policies.”

Lagarde is trained as a lawyer, not an economist and some experts argue that this could potentially politicise the financial institution she plans to lead.

Douglas Rediker, who used to be a member of the Executive Board of the IMF until 2012 representing the United States told Euronews that Lagarde faced several challenges going into her new role, including trying convince European politicians and public that the existing framework and the mandate of the ECB is not working.

“You need to come up with a new institutional framework. That is something that a lot of governments and politicians have raised and it's been slapped down in part it has been slapped down by German and other Northern Europeans who were doing well,” he said.

“Now the question is that if Europeans in the North Germany in particular are not doing so well are they open to rethinking the existing institutional restrictions on doing something more aggressive to try and stimulate growth, get inflation back up to target and otherwise reform how the ECB plays a role in Europe and how European fiscal authorities play role in European economies."

Parliament’s recommendation on Lagarde’s role at the ECB is non-binding.

Her formal appointment by EU leaders will be done during the EU Summit on 17 October.