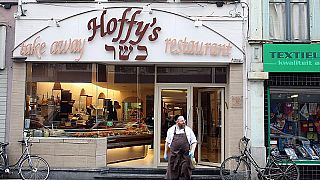 The right to follow one's religion and support for animal rights are going head to head in Belgium.

As of September 1st the region of Wallonia has joined the region of Flanders in effectively banning halal and kosher slaughter, a decision that has serious implications for butchers.

"From that moment we will have to close our business. We cannot sell meat that is not halal," one butcher told Euronews.

Animal slaughter without prior stunning is already banned in several EU countries. Belgium the latest to test the legal lines.

"It is absolutely not a ban on religious slaughter. Not at all. It is a ban on slaughter without stunning...Even if you follow the rules of the 'art' meaning you use a very sharp blade, and then you do everything according to the religious tradition, even then the animal will suffer," says Michel Vandenbosch, President of GAIA.

Some believe the animal welfare argument has been hijacked by politicians to push anti-migrant agendas, Mustapha Chairi - President of CCIB, The Collective Against Islamophobia, said "This regulation is in agenda of Islamophobia in Europe...and now they have a lot of problems with Judes (sic Jewish) organisations. This is why we have to go to justice with the Jude[sic] organisations."

While the Jewish and Muslim communities seek to fight the ban in Wallonia, Belgium's constitutional court has already sent a case to the EU's top court for the Flemish region's ban.

A ruling is expected within two years and would set a precedent for the rest of Europe.