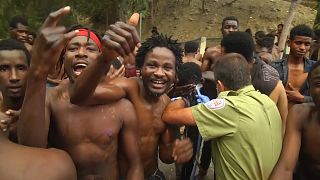 At least 155 migrants from Sub-Saharan Africa successfully crossed into the Spanish enclave of Ceuta after jumping over fences that separate the territory from Morocco, authorities said Friday.

Seven of the migrants clung to the top of a 6-metre-tall fence for more than two hours until Moroccan law enforcement officers brought them down to their side, said the central government's delegation in Ceuta.

A larger group of around 250 attempted the breach, all of them at the same time, at a breakwater where the 8.2-kilometre double fence meets the sea.

Most of them were from Guinea.

One of the migrants was also taken to the local hospital with cuts from the barbed-wire topping capping the fences, and seven more were treated by the Red Cross at a temporary migrant processing centre.

This is the first attempt of this kind in about a year. In October 2018, nearly 300 people had tried to climb the fence separating Morocco from the Spanish enclave of Melilla. By July 2018, about 400 had already invaded the Ceuta border crossing. This 30th of August, six members of the Spanish security forces were injured and had to be transferred to hospital waiting for care

Spain's Socialist government last year pledged to take down the controversial barbed-wire and replace it by elevating the fences to 10 meters, as well as more surveillance and technology to stop the breaches.