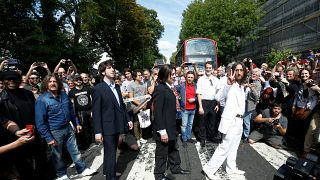 Five Oaks, England: A total of 48 teams lined up for what is the highlight of the British and World's Lawn Mower sporting calendar — an annual 12-hour endurance race staged in West Sussex.

Moscow, Russia: Inline skaters threw themselves down a massive, intimidating race track chock-full of humps, walls, tight curves and other obstacles as they battled it out to be crowned champion in a new sport called downhill skate cross.

In Hong Kong, protesters use water bottles in a battle against police's tear gas.

Valencia, Spain: A British Airways flight was forced to make an emergency landing on Monday when the cabin filled up with smoke. Footage of inside the aircraft showed passengers and flight attendants clearly agitated when a flight from London Heathrow airport to Valencia did not end as expected.

London, UK: Hundreds of people gathered at the world's most famous zebra crossing on Thursday to mark the 50th anniversary of the day the Beatles created one of the best-known album covers in music history and an image imitated by countless fans ever since.