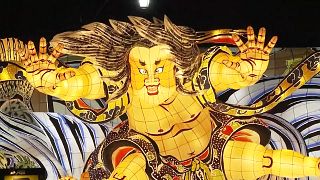 A popular feature of Japan's summer festival calendar got underway on Friday in the northern city of Aomori.

Fifteen large floats are taking part in this year's procession along a three-kilometre route through the city's centre.

Dancers called Haneto, dressed in colourful traditional costumes, jumped and shouted to the sounds of flutes and drums around the floats.

Visitors from across the country gathered along the procession route. They cheered and took pictures as the floats went passed.

The festival runs until Wednesday and is expected to attract about 2.8 million people.