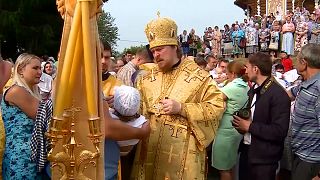 Mass baptism rituals took place across Russia on Sunday to recall the introduction of Christianity as a state religion in ancient Russia more than a thousand years ago.

About 150 people from Yekaterinburg and neighbouring cities attended the traditional annual open-air rites on the Chusovaya River in the Sverdlovsk Region.

The ritual was held in the village of Stantsionny-Polevskoy because of its church which bears the name of St Vladimir, after the 10th-century ruler who led the region's conversion to Christianity.

People taking part in the baptism ceremony were immersed in the river and donned white clothes to symbolise the purity of the soul.

They were then anointed with holy oil.

The Day of Baptism of Russia was added to the list of official state holidays in 2010 when the Russian Orthodox Church proposed giving the official status to the celebration.