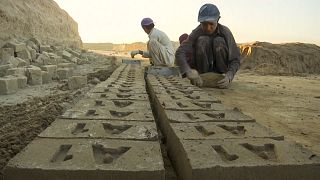 Children head to work in Afghanistan as poverty persists

Every day before dawn, 10-year-old Kamran goes to work with his father and other relatives at a brick factory on the outskirts of Kabul.

Like many children in Afghanistan, school is a luxury his family can no longer afford.

His father, Atiqullah, supports his family of eight as well as several siblings, nieces and nephews.

One of his brothers is ill and another has passed away, leaving their own families in his care.

The US and its allies have sunk billions of dollars of aid into Afghanistan since the invasion to oust the Taliban 18 years ago, but the country remains mired in poverty.

Signs of hardship are everywhere, from children begging in the streets to entire families — including children as young as five or six — working at brick kilns in the sweltering heat.