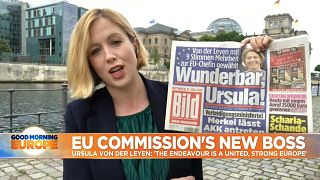 What is the view from Germany on new EU chief Ursula von der Leyen?

Ursula von der Leyen: What is the view from Germany on the new European Commission president?

Ursula von der Leyen might not be a well-known figure across Europe just yet, but she is the longest-serving minister in Angela Merkel's cabinet. As Defence Minister, she has faced some controversy la