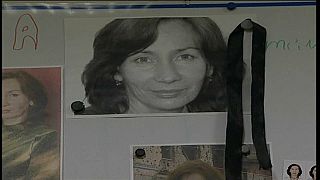 Will the murder of Natalia Estemirova now be properly investigated?

Monday is the ten year anniversary of Natalia Estemirova's killing.

She was abducted in the Chechen capital, Grozny. Her body was later found with multiple gunshot wounds in the neighbouring Caucasus region of Ingushetia.

To mark the anniversary, the human rights groups - including two Russian ones - are publishing a joint statement calling on Russian authorities to finally conduct a thorough investigation into her killing.

Oleg Orlov, chairman of the human rights group Memorial, said the investigation into her death had been sabotaged:

“It is in our joint statement of human rights that there are serious grounds for believing that people from the authorities in the Chechen Republic were involved in Natasha’s murder.

“Her last investigative work was devoted to looking into a public extrajudicial execution in one of the Chechen villages.

“It was this work that caused the Chechen Leader Ramzan Kadyrov to take exception to her.”

“During the (Chechen war of independence), she was engaged in investigating the atrocities of the federal forces and Russian troops such as kidnapping, torture and rape.

“She openly criticised the Kadyrov regime; to be honest, it seems to me, while Putin is sitting in the Kremlin and Kadyrov is in charge of everything in Chechnya, I do not believe that they will find the real killers of my mother”