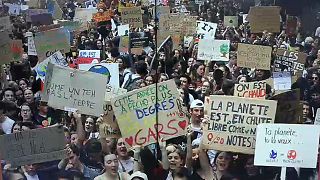 The summer holidays are here, but are you more climate councious?

The summer is in full swing across Europe, but are people changing their travel plans to be more climate-conscious in the midst of the Green Wave?

Between two and three per cent of all man-made carbon emissions in the world come from aviation. Each year, around 4.6 billion journeys are made by air.

This week in France the transport minister has announced an eco-contribution to all air travellers using the country’s airports. The new tax will vary from €3 to €18 depending on the destination and the length of the flight.

Some airlines have also been questioning people’s motives for taking a flight. Dutch air carrier KLM, for example, is urging all their passengers to ‘make responsible decisions about flying.’ In a letter entitled ‘Responsible Flying’ they say they are aware that aviation comes with a big responsibility ‘to make sure our children have a planet to explore as well.’ In the open letter, the company’s CEO and President Pieter Elbers asks both passengers and the industry to ‘work together to truly create a sustainable future for aviation’. He goes on to say that ‘Flying – after all these years the feeling is still magical. For many of us, it changed our world forever.

‘Sustainability is a journey, not a destination’ says Scandinavian airlines SAS president Richard Gustafson on the company’s Twitter feed. In Sweden, the word ‘flygskam’ literally translates as ‘flight shame’, and it has been used online as a hashtag campaign to raise awareness of the issue.

Euronews’ The Cube team spoke to a traveller who is currently on holiday in Europe. Felipe Pissardo is on his way from Holland to the south of France by train. He says he chose a train trip because of his ‘concerns about the environment and the amount of pollution that planes create.’

Do you have to go to that face-to-face meeting? Do you really have to carry all that luggage? Can you reach your holiday destination by train? These are some of the questions being asked in the fight to a more eco-friendly way of travelling.