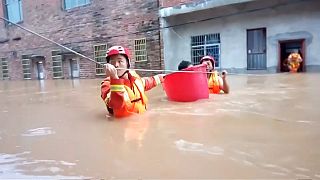 'Thousands evacuated since start of flood season in China'

China has saved and evacuated more than 25,000 people since the start of this year's flooding season, the Ministry of Emergency Management said on Tuesday.

Officials said 25,659 people have been saved or evacuated from flood hazard areas from May 26 to July 8.

In total, 1.63 million people in seven provinces and regions were impacted by floods, with around 77,000 people relocated.

Jiangxi and Zhejiang in east China, Hunan in central China and Guangxi Zhuang Autonomous Region in south China are among the worst-hit provinces and regions since the start of the flood season.