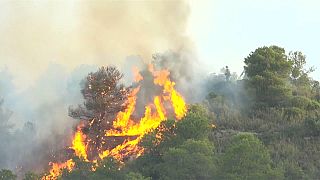 Catalonia wildfire threatens to burn up to 50,000 acres

A wildfire in the Tarragona area region of Catalonia covered around 10,000 acres on Thursday morning and firefighters warned that the blaze may spread by up to 50,000 acres as the heatwave fuels the flames in coming days.

The fire was one of the worst the region has seen in 20 years, the Catalan regional government said, adding that around 30 people had been evacuated from farmhouses in the area.

Temperatures in Spain are expected to soar to over 43 degrees centigrade on Thursday and Friday (June 28).

Police closed roads and evacuated 30 families from the nearby town of Flix, in the district of Ribera d'Ebre, local authorities said.

The fire, which began after 14:29 CET on Wednesday, has already engulfed over 3,600 hectares and could consume 20,000 hectares all together.

If the blaze is not brought under control it could be the worst wildfire to strike Catalonia in 20 years.

The cause of the fire is being investigated by authorities.