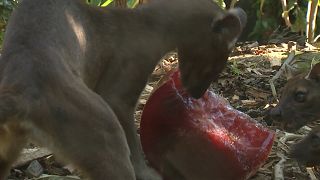 Anyone for an ice lolly? Animals in Paris zoo try to keep cool

If you thought ice lollies were only for humans, think again. The animals at Paris Zoological Park used the treats to cool down, as they battled this week's heatwave alongside their human helpers.

The zoo's sea lions took refuge in the water where they chased down their frosty snacks, but not all species displayed such an enthusiastic uptake.

Director of the Patagonia zone at the park Bastien Servieres said the measures being employed during the heatwave included showers and ice were already in place year-round, but that zookeepers did the rounds more often due to the high temperatures.

Animals in the greenhouse such as the Toco toucan and giant anteater were given showers, whilst those which were more exposed to the sun were given iced fruit and increased access to water.

Meanwhile, the cat-like Madagascan carnivorous fossas were treated to frozen rabbit blood with a rabbit head inside.

For the moment, it seems animals at the zoo have had less trouble handling the heat than human visitors.