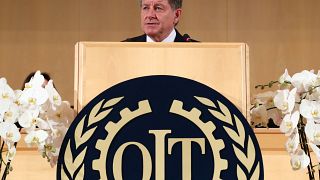 The year 2019 marks the centenary of an important defender of worker's rights.

The UN's International Labour Organisation is holding its annual conference as it celebrates 100 years of protecting employees. The conference is intended to look forward to the future of work.

Addressing dignitaries at the beginning of the gathering, Director-General of the ILO Guy Ryder reminded them that worker's rights are more important than ever.

"You are here because you share the vision and confidence of Albert Thomas and the conviction that it is within our grasp to generate the conditions for decent work for all, in which enterprises prosper, people succeed, and societies progress," he said.

The ILO was created in the wake of World War One, in 1919 as part of the Treaty of Versailles. After the Second World War, it became an agency of the United Nations. Its membership is still growing, at numbers 187 countries today.

In the past, it's been a driving force behind the implementation of capped working hours, maternity rights and gender equality. But its next challenge will be dealing with the advent of automation, that's quickly rending more and more human labour obsolete around the world.

“The fact is that the future of work is not pre-determined," said Ryder.

"It will not be decided for us, not by robots, not by artificial intelligence. But the fact is that the future of work will be the result of our decisions, our choices, our capacity to follow-up on them."