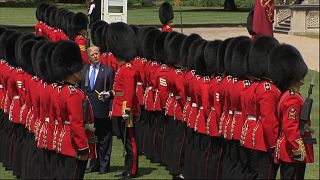 Donald, D-Day and dropping into France again: the best No Comment videos of the week

Queen Elizabeth II was on hand to greet US President Donald Trump as he and wife Melania began a state visit to the UK.

Grenadier Guards, wearing traditional bearskin hats, gave him a guard of honour on the grand lawn of Buckingham Palace.

Hundreds of people, civilians and military alike, hailing from around the world, gathered along the Normandy coastline in France to remember those who lost their lives during the D-Day invasion, 75 years ago this week.

The sea of mercury blue couldn't have been more peaceful as day broke over Omaha Beach, the first of five code-named beaches where the waters ran red the morning of June 6, 1944, when Allied forces came ashore to push the Nazis out of France.

Harry Read, 95, and John Hutton, 94, both recreated their daring exploits as part of the Allied operation on June 6, 1944.